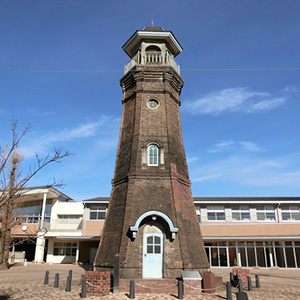 The construction of the Bell Clock Tower started in 1915 and was completed in the following year using donations from Keisuke Kobayashi II (born in Sanko-cho),
who ran an apothecary shop in Yokohama. The Tower became a symbol of the area with its bell ringing to announce the time, but the clock’s bell was replaced with a siren sounding from the watchtower of the police station in 1937. The Old Bell Clock Tower is 14.56 meters high and is surrounded by bricks as a curtain wall, and its Renaissance-style windows and domed roof give us a feel for the Taisho Roman style, a kind of retro atmosphere. It is the oldest reinforced concrete building in the prefecture.
The Old Bell Clock Tower is preserved on the campus of Kita Elementary School in Isesaki City as a cultural property designated by Isesaki City, Gunma Prefecture.